The M4A3 76mm Sherman is the 4th version of the most widely built US tanks at the time of World War II, named after the "General of the Army William T. Sherman"

The bottom of the M4A3 model is made entirely of metal which is 2mm thick. This gives the model tremendous stability despite its small size. Equipped with a 3in1 steel transmission, the power of the torque-intensive motors is transferred optimally and without losses to the metal wheels. The metal chain is characterized by metal guide wheels and rubber-coated metal rollers and is guided in a spurt-free manner. The metal tower has the new 360 ° rotation system and is equipped with a metal gun barrel. The rechargeable battery can be recharged via an external charge connection in the under - sump and the upper sump can be opened with a quick - release fastener without tools. The model is available as IR and BB variant depending on the equipment. 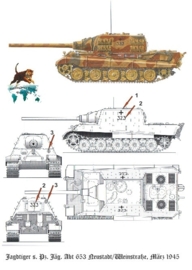