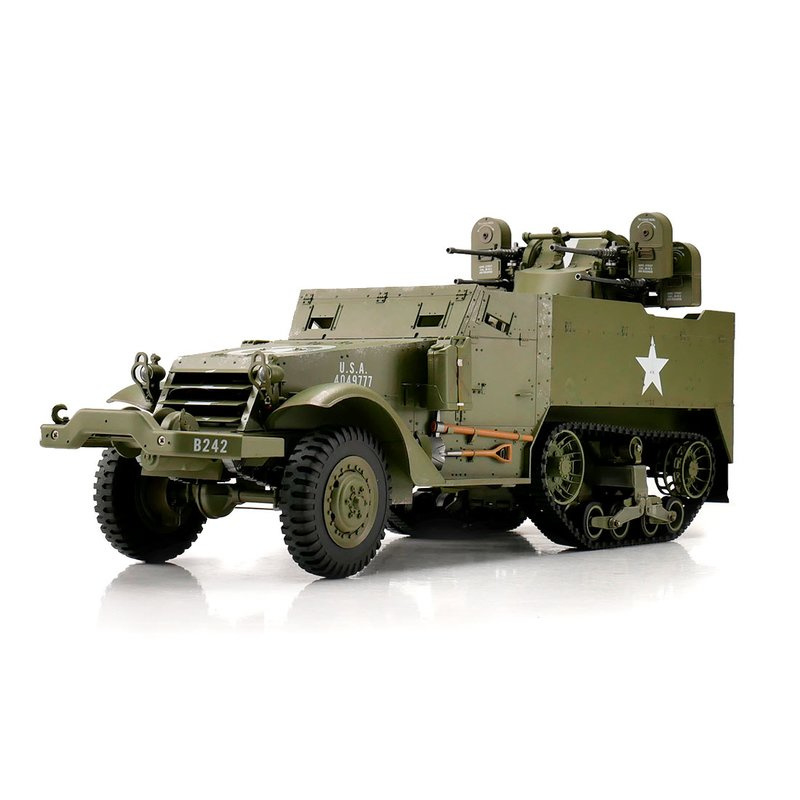 Most of the vehicle frame and drive train is made of metal!
Vierlingsflak: 360 ° turnable and adjustable elevation, with firing imitation (light and sound).
Includes 2 very beautiful and detailed driver figures.
Servo-controlled steering and track drive proportional controled with 64 speed steps!

The M16 Vierlingsflak (4 x 12.7 mm) for air defense is a US American half-track based on the successful M3 Half-track troop transporter. In the years 1943-1944 2,877 M16 were produced. After the WW2 greater quantities of M3 personnel carriers were upgraded to the M16 standard. Together with the M15, they formed the air defense of the American Infantry and armored divisions.

After the end of the 2nd World War, the M16 was submitted numerous to allied armies and even took part in many military conflicts. The Bundeswehr in Germany used in the years 1956-1972 192 pieces as Panzerflak 16. With a top speed of 70 km / h, the half-track M16 reached a much better off-road cpability compared to a wheeled vehicle. The high firepower of 4x12,7 mm machine guns was very effective and was therefore used often in ground combat.

Used under the direct supervision of an adult
Recommended age: 14+
Not suitable for children under 36 months of age. Choking hazard due to small parts.